Of course, you must need this Clover Gold slot review before enjoying the online game slot. Following the success of Pragmatic Play and Reel Kingdom’s Big Bass Bonanza in 2020, it was unsurprising to see a slew of sequels. Bigger Bass Bonanza, a Megaways version, and a Christmas edition have all been added so far.

However, because fish can only keep good for so long out of the water, the company wisely decided to relocate the gameplay to a different location.

The resulting slot, Clover Gold, is Irish/Leprechaun-themed, so it’s not quite new. Pragmatic Play has come up with a few new items in the shape of special Collect Symbols that can improve the basic Money Symbol gathering feature as part of the change from land to water.

Yes, that means we’ll be returning to the Emerald Isle, the home of rolling green hills, azure skies, and enchanted characters. All of these things can be found on or around a 5×3, 20-payline game grid, while a cheery Celtic song plays in the background.

Clover Gold slot game is the latest in a long line of Irish-themed slots from Pragmatic Play, and it’s neither a stunner nor unappealing to the eye. However, it’s difficult not to throw the g-word at it. 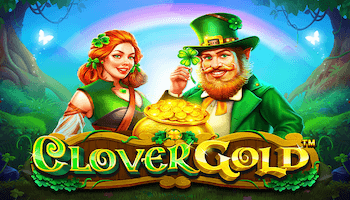 1. Return to Player and Volatility

Clover Gold is based on a medium volatile math model that comes in three RTP variations, with the standard being a 96.54% variant. Larger wins are more probable to appear in free spins with a Money Symbol multiplier on board. Clover Gold may be played on any device, with bets ranging from 20p/c to £/€100 each spin.

Although collecting Money Symbols is the most thrilling way to earn money in Clover Gold, normal line winnings should also be considered.

The J-A card rank tiles pay 2.5x the bet for five of a kind in the lower half of the paytable, followed by high-pay mushrooms, beer mugs, a lady character, and a Leprechaun, which pay 3.75x-12.5x for a five-symbol hit. Wild symbols appear on reels 2-5 and can replace any of the regular pay tiles.

If your luck is on a roll, there’s plenty of symbol collecting to be done in Clover Gold. The four-leaf clover is the Money Symbol in this gambling slot, and it appears on reels 1, 2, 3, and 4. When Money Symbols appear on reel 5 alongside a Collect Symbol, the Money Symbol values are rewarded.

When three bonus symbols appear on reels 2, 3, and 4, you will be awarded eight free spins. Free spins work in the same way as regular spins, except that when Collect Symbols appear, they leave a trail behind them.

Every fourth Collect Symbol added to the trail delivers +8 free spins and a multiplier of x2 for the first trigger, x3 for the second, and x5 for the third. The feature cannot be triggered again after the third trigger. Money Symbol collection wins are multiplied by the multiplier.

This slot game can be viewed in a variety of ways. One, it’s a response to gamers requesting more Big Bass Bonanza dynamics, but in a merry Irish setting. Pragmatic Play has simply provided slot lovers with what they want to play in this example.

Dues are reasonable. The alternative method of this real-money slot processing is a little more cynical. You know how something may grow massively out of nowhere, attracting the attention of others who rush over to cash in before the fad fades away?

Let’s take the case of bitcoin. Following the unexpected success of meme coins like Doge, a slew of imitators emerged, including Shiba Inu and Elon Musk-related tokens like Lorde Edge, Dogelon Mars, and who knows how many others.

The astonishing thing is how successful these bandwagon meme coins can become before the rug is pulled out from under the investment pots of starry-eyed speculators chasing million-dollar returns. Finally, that is our Clover Gold slot review for you to figure out and play at bonanza88 slot site.